Tis the season for Tomatoes and Social Justice

In this second guest post, Janice Brewer investigates the tomato industry in the US and what common practice means for agricultural workers and social justice.

As summer rolls through, tomatoes flourish in all sorts of varieties, colors, sizes, and tastes. As I sink my teeth into an heirloom German tomato, grown 100% organically by Green Edge Gardens in Athens, Ohio, I am blown away by the flavour. I grew up hating tomatoes! So why was this tomato so special? 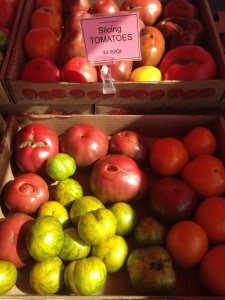 Tomatoes are thought to have originated in the Northern Andes Mountains where the weather tends to be warm and wet creating an optimal growing climate for tomatoes. When the Spanish invaded these areas they became intrigued by tomato and brought it back to Europe. Being apart of the Nightshade family – a wide group of flowering plants generally containing alkaloids – the tomato was originally thought of as poisonous and unfit for consumption but it later developed the name of the “love apple” and “golden apple” given by the French and Italians. In addition to it’s growing popularity in Europe, then North America, the tomato was found to have countless health benefits.

According to the USDA – United States Department of Agriculture – the United States is now the world’s top tomato producer and accounting “for more than $2 billion in annual farm cash receipts.” Because of the similar Northern Andes climate, approximately two-thirds to three-fourths of all commercially produced fresh-market tomatoes in the US come from Florida and California and can be virtually grown year-round – contributing to consumers year-round impatience and taste bud demands. Naturally, as industry-related pressures rise, markets push to cut costs wherever possible to reach maximum profit– most often cutting labour costs.

Immokalee, Florida is the largest agricultural worker centre producing around “90 percent of the tomatoes in our grocery stores and restaurants”. The farms are primarily comprised of migrant workers or undocumented immigrants from Mexico or other Central American countries. The work compared to the pay is greatly skewed. In the documentary Immokalee: A Story of Slavery and Freedom, a man describes, “When we pick these tomatoes, we walk with our hands bruised and dirty clothes. We have to pick two tons of tomatoes to earn fifty dollars in a day. And many times, we don’t realize how much sweat we have to lose in order to earn fifty dollars.”  These migrants came to find work in efforts to better their families back home but had no idea their ignorance would lead to 12 hours in the sun without breaks and an inescapable circle of exploitation; they are stuck because they must work in order to survive. Ramiro Gonzales admits, “I was so ignorant, too. I ignored what was happening. I just thought, “Why do they only pay $40 or $50 when it is very hard work?””  Because of the level of poverty, the workers can only afford housing to match: dirty, dilapidated, and over-crowded trailers lacking heating or cooling. In addition to low wages, a multitude of abuse is common: “To deflect the brutal sun and pesticides and herbicide that coat the plants, the workers swelter inside long sleeves, gloves, hats, hoods and coveralls. Sometimes, ongoing pesticide spraying blows right over nearby pickers”. The daily verbal and physical abuse from supervisors extends to sexual harassment as well. Women have mentioned being inappropriately touched or “demanded sex in exchange for steady jobs”. With a patterns demonstrating modern slavery, the workers experience the “worst working environment in American agriculture”.

Joining the Immokalee tomato farming community at age 17, Lucas Benitez is now known as an “activist to watch” upon founding the Coalition of Immokalee Workers (CIW) in 1995. The CIW has an upwards of 4,5000 members all gearing up to fight for the same cause: to educate about farm worker injustice while pressuring corporate food industries into altering their methods to foster better working and living environments and to provide protection for the living human beings picking our food. Beyond marches and work stoppage strikes, the members joined forces with the Fair Food Program (FFP) and “organized a four-year boycott of Taco Bell [one of the largest Florida tomatoes purchasers] to get its parent company, Yum Brands, to agree in 2005 to pay an extra penny a pound for tomatoes, helping increase workers’ wages.” With wage increases sustained by the “penny per pound” push, the FFP created a monitored model of standards for agreeing companies to follow. Many companies including Burger King, Whole Foods, Chipotle, and Subway have joined the movement with the biggest affiliate being Wal-Mart. 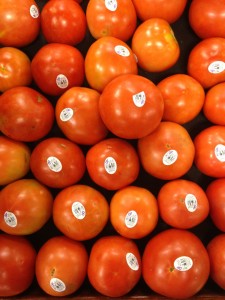 This partnership developed “the best workplace-monitoring program…in the US” and increased workers wages by 20 to 35 percent. With the success of the FFP and the CIW and the support of conscious consumers, tomato farm workers from the pre-mentioned documentary know they have “raised the voice of the worker here in Immokalee, and from here we have affected the whole country.” Immokalee, Florida shifted from the absolute worst to best. To achieve this farm worker justice, Benitez investigated from a systematic perspective and envisioned the solution to benefit all parties involved: sustaining the solution.

(All images credited to Janice Brewer)