Reflections from the Edinburgh Legal Theory Group Past Convenors’ Colloquium

The Colloquium was well attended by staff and students from across The University of Edinburgh. This included several new PhD candidates who had only arrived in the university for the first time that week. Some participants and presenters had travelled from other parts of the world.

The cosmopolitan make-up of the Colloquium’s attendees made for a varied discussion that was enhanced by the broad spectrum of topics covered.  The topics were—loosely—split across the two days, with the first exploring the more practical legal applications (related constitutional law and political theory) as well as the theoretical ideas associated with private law, and the second exploring the more analytical aspects of legal theory.

The first speaker was Haris Psarras (Cambridge).  In his paper—The Duty of Care and its Breach: Scope and Standard of Responsibility in Negligence Law and Beyond—he argued that duty of care is a separate requirement for liability in negligence, and that this is a moral (not a legal) duty. 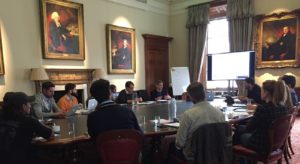 One most probed aspects of his paper related to the way in which Hohfeld’s scheme of correlative rights and duties was being applied.  This proved to be a great way to start the discussions generally, and for Psarras to press his argument that the argument does not present a restriction of a duty but, instead, presents a different liability mechanism.

The second presenter—Francisco Saffie Gatica (Adolfo Ibánez)—gave a presentation of an, as yet, untitled paper exploring ideas about why theories of law and legal reasoning cannot explain why contemporary law actually works. In exploring why legal theory cannot account for the modern administrative state, he relied on ideas put forward by Vermule and Rubin, as well as a recent book by Brian Tamanaha: A Realistic Theory of Law.  This was a fantastic opportunity for the Group to test the argument as Tamanaha defended his book’s thesis across a full day’s symposium in Edinburgh during the recent Spring Festival. 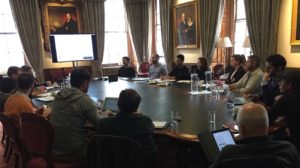 As is suggested by his paper’s title—Mapping Normative Ontology—Paolo Sandro (Salford) is interested in the questions around norm’s existence and in mapping the differences between moral, legal and social norms. Sandro’s argument sketched an account of the existence of norms in both epistemic and metaphysical terms.

In the penultimate paper of the Colloquium, Martin Kelly (Edinburgh), asked What do Courts Ordinarily Mean by ‘Ordinary Meaning’?  In addressing a point that is a central issue in his PhD thesis, Kelly exposed, in a variety of ways, the uses, meanings and relative confusion around the use of the phrase ‘ordinary meaning’ in judicial dicta.  This not only clearly illustrated the issues that exist and stem from the problem he identifies, but also illustrated clearly the unintended consequences that can arise in the use of seemingly innocuous—and what are seemingly intended to be useful—phrases in legal writing.

Lucas Miotto (Edinburgh), the individual who has most recently been convenor of the Legal Theory Group, gave the final presentation: What Makes Law Coercive When it is Coercive? Miotto, like Kelly, presented a core argument from his PhD.  He raised, and sought to answer, two core questions: first, what must be true for the statement that a legal system is coercive to be true; and, second, given the features that arise in response to the first question, what features are required to make a law coercive.

The Colloquium marks yet another successful collaboration between the Global Justice Academy and the Edinburgh Legal Theory Research Group.  We are proud to be associated with the GJA and we are deeply indebted for the sponsorship of an event that provides the Group’s members, as well as the wider academic community, with such fantastic support.

Paul Burgess is a third year PhD candidate in Edinburgh Law School at The University of Edinburgh. He’s interested is anything to do with – contemporary and historical – conceptions of the Rule of Law. Some of the things he’s written can be found here. When he’s not doing Rule of Law things, he can generally be found co-convening the Edinburgh Legal Theory Research Group.