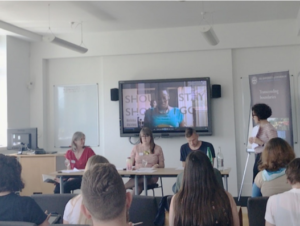 The Summer School kick-started on Monday the 25 June, the theme this year being ‘Navigating the Grey Zone: Complicity, Resistance and Solidarity’.The following is from the ‘Conceptual Perspectives’ talks, where expert speakers from the fields of human rights, philosophy, and political theory (Ruth Kelly, Charlotte Knowles and Lukas Slothuus, pictured above) each gave their unique insight on the key issues.

Storytelling as a way to reinforce human rights

First to speak was Ruth Kelly, who focused on the potential for narrative to help communities articulate approaches to the development of human rights. To give an example of such artistic intervention, she showed footage taken at a poetry workshop in Uganda, where a woman recites a poem about struggling to choose between action and complicity, entitled ‘Should I stay? Should I go?’.

END_OF_DOCUMENT_TOKEN_TO_BE_REPLACED

In April 2018, the GJA sponsored its first ‘Spring School’ in a collaboration with Moray House School of Education. In this post, Spring School Co-organiser and GJA Management Group member, Dr Callum McGregor, reflects on the Spring School’s innovative community-university partnership, which fostered strong links with local organisations and social justice practitioners. It is hoped that a similar Spring School will run again next year. Callum is also the programme director for the online MSc in Social Justice and Community Action, which is sponsored by the Global Justice Academy.

The Global Justice Academy (GJA) is an institutional forum for dialogue with practitioners engaged in justice issues locally and globally. This short blog highlights one such example of local dialogue, in the form of a series of community-university workshops on Critical Discourse Analysis (CDA). CDA is a form of critical social research, whose purpose is to analyse the ways in which language can be used to both reproduce and challenge social injustice. Discourses can be thought of as representationsof various aspects of our social lives. These representations are made up sets of rules and statements that determine whatcan be expressed within a particular context, howit can be expressed, by whom and under what conditions. Discourses are important because they have real material effects on the distribution of burdens and benefits along different axes of inequality. 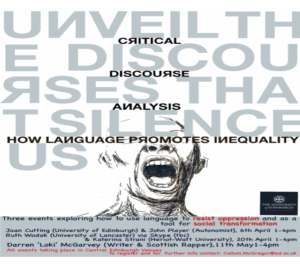 Between April and May 2018, three workshops were held, with the purpose of bringing together community practitioners, community-based adult learners, activists, students and academics to learn together about CDA. Specifically, the workshops focused on how CDA can be used creatively to link education to social action, through addressing the interests and struggles of ordinary people in communities.

END_OF_DOCUMENT_TOKEN_TO_BE_REPLACED

Reflections from the Tenth Aniversary Edition of the Edinburgh Legal Theory Festival: Workshop on Virtue Ethics, Markets, and the Law 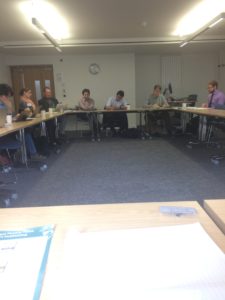 The workshop on ‘Virtue ethics, Markets, and the Law’—held on Tuesday 5thJune, the second day of the week-long Edinburgh Legal Theory Festival (4th-8thJune)—was devoted, as its name suggests, to explore the implications of a virtue-centred approach to legal theory for a wide-ranging variety of related topics, including the relationships between power, virtue and the constitutional state (Dominic Burbidge), algorithmic governance (René Urueña), the Rule of law and the law of equity (Irit Samet), intent to contract and trust (Prince Saprai), and the future of virtue jurisprudence (Chapin Cimino). All sessions were followed by a lively discussion in which the participants had the opportunity to give and receive important feedback on their ongoing research projects.

END_OF_DOCUMENT_TOKEN_TO_BE_REPLACED

In this post, the Co-Convenors of the Edinburgh Legal Theory Research Group for 2017-18, Richard Latta and Joaquin Reyes, report on their recent Winter/Spring seminar series and the topics discussed. 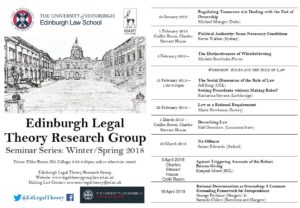 Liberating Comparisons: Report from the Workshop

The Liberating Comparisons network emerged out of a workshop by the same name in Edinburgh on 8 December 2017. The workshop drew together scholars from across the UK to explore the potential of comparative methods.

END_OF_DOCUMENT_TOKEN_TO_BE_REPLACED

Thomas Hobbes: a philosopher of peace?

The Edinburgh Institute for Advanced Studies in the Humanities (IASH) recently hosted a workshop on “Thomas Hobbes and Peace”. The event brought together political theorists, intellectual historians, and specialists in international relations theory, and received funding from the Global Justice and Global Development Academies’ joint Innovative Initiative Fund. Dr Maximilian Jaede, a postdoctoral fellow at IASH, summarises the papers and key themes discussed at the workshop.

The event was aimed at reconsidering Hobbes’s conception of peace, its place in the history of political thought, and its reception today. Speakers approached this theme from a variety of perspectives. While all participants highlighted Hobbes’s commitment to peace, there was debate on what precisely Hobbes means by being at peace, and on the interpretation of his ideas in relation to other conceptions of peace.

Prof. Glen Newey (Leiden) highlighted the puzzle of why elements of war seemingly persist within the Hobbesian civil state. In particular, the paper examined Hobbes’s distinction between citizens, who are at peace, and slaves, who remain in a state of war towards their master. This suggests a juridical distinction between the states of war and peace. However, the distinction between war and peace may be less clear-cut. Newey emphasised the resistance rights of citizens and the possibility that a Hobbesian state might enslave its own people. In the discussion of this paper, participants expressed different views on the question of whether, and in what way, Hobbes envisions the sovereign and citizens to be at peace with one another.

Prof. Deborah Baumgold (Oregon) offered an interpretation of Hobbes as a political philosopher of peace inspired by Hugo Grotius’ The Rights of War and Peace. She presented new historical evidence for Hobbes’s likely personal acquaintance with Grotius, and highlighted the similarities of both thinkers’ political projects. Like Grotius, Hobbes’s aim was to create peace, which Baumgold described as the supreme good (summum bonum) of society. The discussion of this paper raised the questions of whether there is a difference between pursuing peace and merely avoiding war, and what it ultimately means to be a philosopher of peace.

Prof. Patricia Springborg (Humboldt, Berlin) challenged the view that Hobbes was a predecessor of realist theories of international relations. Her paper contrasted realist approaches to war with Hobbes’s political theory of peace. Specifically, Springborg discussed Hobbes’s opposition to colonial adventurism and emphasised his insistence on the need to maintain a well-balanced political economy. Commentators questioned whether Hobbes’s political theory contains a norm of non-interference in other states’ affairs. Another theme of the discussion was the possible anachronism of viewing Hobbes as advocate or critic of empire in the modern sense.

Dr Gabriella Slomp’s (St. Andrews) talk focused on the connections between peace and friendship in Hobbes’s political thought. Hobbes is sometimes blamed for the decline of friendship as an ethical or political ideal in the modern period. Yet, Slomp rejected the view that Hobbesian friendship is necessarily confined to the private sphere. Hobbes was highly conscious of possible political implications of friendship, which he considered to be a source of corruption and a threat to civil peace. The presentation concluded that Hobbes advocated an attitude of universal friendliness, as opposed to bonds of friendship between citizens, as a condition of peaceful coexistence.

Luca Tenneriello (Sapienza Rome) addressed the question to what extent Hobbes considers religious conscience a challenge to civil peace. The paper outlined different meanings of ‘conscience’ in Hobbes’s works, and examined his reasons for considering appeals to religious conscience politically dangerous. In Tenneriello’s view, Hobbes insisted on public education as a means to counter this threat. The subsequent discussion focused on differences between Hobbes’s views and liberal accounts of liberty of conscience. It was also noted that Hobbes does not seem to acknowledge any positive role of private conscience in regards to making peace or refusing war.

Dr Max Jaede (Edinburgh) presented parts of a book that examines Hobbes’s conception of peace in light of debates about liberal world order, international intervention, and peacebuilding in war-torn societies. He rejected the view that Hobbes advocates a negative peace that is based on mere coercion. Rather, Hobbes aims for a positive peace that is realised in accordance with certain principles of justice. Jaede also argued that the internal pacification of Hobbesian states leads to more peaceful international relations. Commentators raised questions such as in what way Hobbes may be said to anticipate liberal conceptions of peace, and how Jaede’s interpretation can account for authoritarian elements in Hobbes’s political thought.

‘Buildings are for (Some) People’: Reconsidering Architecture and the Struggle for Urban Space 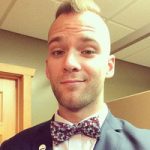 The Global Justice Academy is delighted to post its second book review of the 2016-17 academic year as part of its Student Ambassador Programme. James Gacek is reading for a PhD in Law. Here, he review’s Bill Caplan’s Buildings are for People as part of our Urban Justice Lab.

Exploring the interactions between people and the natural environment, Bill Caplan’s Buildings are for People: Human Ecological Design issues a clarion call for the design/build professions to critically assess architecture, green design and sustainability in the context of human ecology—that is, the examination between people, community spaces and the ecosystem which surrounds and penetrates us.

Such a focus is significant, as sustainable building has gained resonance in recent professional and academic accounts (Jones & Card, 2011). The built environment of urban spaces has the potential to alter “our living environment in material and experiential ways, shaping the character of human experience, the physical, mental and economic wellbeing of individuals and the community at large” (Caplan, 2016, p. xvi, italics in original). Caplan’s book is a unique approach to further understanding the process of conceiving architectural design, while both highlighting the social aspects of human interaction as well as the benefits of ‘green’ and sustainable architectural designs.

END_OF_DOCUMENT_TOKEN_TO_BE_REPLACED

Workshop on Dignity: Reporting from an Innovative Initiative Fund Event

The Edinburgh Legal Theory Research Group had the pleasure of hosting, with the kind sponsorship of the Global Justice Academy through its Innovative Initiative Fund, the Workshop on Dignity on 6 October 2016. The workshop had three speakers: Ioanna Tourkochoriti (National University of Ireland Galway), Colin Bird (University of Virginia), and Adam Etinson (St. Andrews).

This guest post by co-organisers, Lucas Miotto and Paul Burgess, discusses the presentations and debate that took place.

The workshop was well attended by both staff members and students. An interesting, and beneficial, feature of the audience, was that it reflected the interdisciplinary character of the topic; we had attendees coming from myriad fields, such as politics, human rights, international and constitutional law, as well as legal and moral philosophy. Discussion was very lively and, perhaps due to the diverse character of the audience, presenters received feedback and questions from several different angles.

END_OF_DOCUMENT_TOKEN_TO_BE_REPLACED

Reflections from the Association of Human Rights Institutes 2016 Conference

Dr Kasey McCall-Smith and Dr Dimitrios Kagiaros attended the 2016 Association of Human Rights Institutes (AHRI) conference on behalf of the Global Justice Academy. The conference was hosted by the Netherlands Institute of Human Rights (SIM) of Utrecht University, and welcomed over 200 academics and researchers. In this short post, Kasey McCall-Smith reflects on the discussion.

The theme of the conference was ‘50 Years of the Two UN Human Rights Covenant: Legacies and Prospects’. The conference enjoyed presentations, debates and interventions from well-known faces on international human rights scene.

END_OF_DOCUMENT_TOKEN_TO_BE_REPLACED

The Concept of Global Law: what is it and what are the rules?

A guest post from Lucas Miotto Lopes, Convenor of the Edinburgh Legal Theory Group, who received an award of £400 from the GJA Innovative Initiative Fund to host a seminar on ‘The Concept of Global Law’.

With the sponsorship of the Global Justice Academy the Edinburgh Legal Theory Group held the seminar entitled The Concept of Global Law on September 24th. Jorge Fabra, a PhD candidate at McMaster University, was the presenter and Professor Neil Walker, from the University of Edinburgh, acted as the discussant. We had the privilege of counting with a wide and diversified audience – from undergrads to staff members. Participants were keen to engage in discussion and offered both critical remarks and constructive feedback. As a result, discussion was very live, friendly and informal. 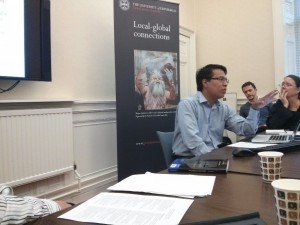