Off the Record: 9/11 Military Commission in its 7th Year 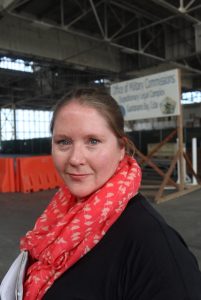 This is the third post in a blog series by Dr Kasey McCall-Smith which examines some of the contentious legal issues raised in the US v. Khalid Shaikh Mohammad, et. al. military commission proceedings against the five men charged with various war crimes and terrorism in relation to the 11 September 2001 attacks on the US. The series is a continuation of her project ‘Torture on Trial’ which was funded by a grant from the Royal Society of Edinburgh and is supported by the Edinburgh Law School.

Whatever Happened to the Alleged 9/11 Terror Plotters? 9/11 Military Commission in its 7th Year

The largest criminal justice trial in US history is currently taking place on Naval Station Guantánamo Bay. For the most part, the general public has no idea. Apart from consistent media coverage by a small handful of journalists, including Carol Rosenberg (formally of The Miami Herald and now with the New York Times) and John Ryan of Lawdragon, the US public and the formerly vocal academy have forgotten that five men, Khalid Shaikh Mohammad, Khallad bin Attash, Ammar al-Baluchi, Ramzi Bin Al-Shibh and Mustafa al-Hawsawi, are charged with conspiracy to commit various war crimes and terrorism in relation to the September 11th attacks under the Military Commissions Act 2009 (MCA) in United States v. Khalid Shaikh Mohammad, et al. (9/11 case). In previous blogs I have explained the choice of venue for the detention facility, law of war detention, details on some of the detainees, and addressed issues relating to torture. This series looks in more detail at specific issues in the trial and why controversial legal stand-offs may not go away.

The first incarnation of the military commissions were replaced by the MCA following the US Supreme Court decisions in Hamdan v. Rumsfeld and Boumediene v. Bush. The MCA applies to alien terrorist suspects and members of al Qaida, defined as alien ‘unprivileged enemy belligerents’, rounded up from 2002-2008, though recently there has been talk of the potential use of the statute to detained ISIS fighters. 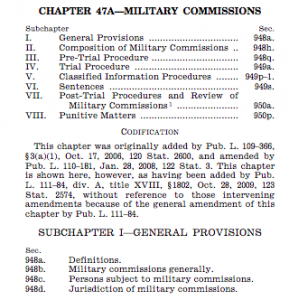 The MCA sets out its applicability to offences before, on and after 11 September 2001 and raises questions about the long-standing principle of no ex post facto laws and the creative addition of ‘conspiracy’ to accepted war crimes definitions. The statute combines different and overlapping issues of military law, constitutional law and international law. Observing the 9/11 hearings, the failure to thoroughly evaluate the relationship between these different legal systems is proving problematic in every aspect of the trial’s slow progress. The only clarity lies in the fact that legislative responses to 9/11 were walled off from the realities of the outrageous conduct of the CIA during its Rendition, Detention and Interrogation programme.

According to the Senate Intelligence Committee Study on CIA Detention and Interrogation Program (SSCI Report), it is well documented that Khalid Shaikh Mohammad was subjected to combinations of ‘enhanced interrogation techniques’, so-called EITs, equating to torture designed to exercise total control over the victim. Notably, he suffered periods of sleep deprivation lasting up to 180 hours and was ultimately waterboarded 183 times. The other four defendants were similarly treated. Bin Al-Shibh was subjected to EITs for approximately 34 days and kept in social isolation for almost 2.5 years. Bin Attash and al-Baluchi were subjected to EITs over a period of months. The CIA waterboarded al-Hawsawi and further subjected him to such brutal bodily treatment that he suffers irreparable physical damage. In short, US agents subjected each of them to a sustained and systematic programme of torture in direct violation of US and international law.

The illegal actions by the US were defended by the then Bush Administration as necessary to national security. When rumours and then evidence of ill-treatment began to leak out of US military bases abroad, international civil society and US civil rights groups called for the US, as well States working in concert with the US, to maintain detention and treatment standards demanded by the law. In particular, the customary Law of War and standards outlined in the Geneva Conventions as well as the Convention Against Torture were frequently invoked. Yet as the first detainees arrived in Guantánamo on 11 January 2002 these well-established rules appeared to be the furthest thing from the US government’s mind. For anyone watching as the first goggled and shackled jumpsuit-clad men dropped to their knees in the Cuban heat it was clear that this would be a long game. Of the approximately 780 men that were detained in Guantánamo since it opened the doors to the now defunct Camp X-Ray (pictured below), only 40 remain. One man (Balhul) is serving his sentence following conviction by military commission, 26 are known as ‘forever prisoners’ and eight are currently under charge, including the 9/11 defendants. 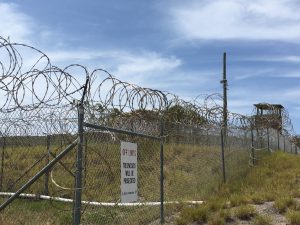 The 9/11 charge sheet alleges that the defendants committed conspiracy, attacked civilians, and committed murder in violation of the Law of War, intentionally caused serious bodily harm, hijacked an aircraft, and committed acts of terrorism resulting in the deaths of 2.976 along with countless injuries. Following their arraignment on 5 May 2012, intentionally causing serious bodily injury was struck from the charges in the early months of the case. From the outset, issues regarding public access to the trial were raised. Limited public access to close circuit broadcast sites was offered to families soon after the litigation commenced. Though now only a trickle of viewers attend the 40 second delayed live-streams at Fort Meade, Fort Devens and Fort Hamilton. The roster of media and civil society observers at Camp Justice, too, can only be described as small when compared to the original outpouring of attention on the detention activities in Guantánamo.

In its 7th year of pre-trial proceedings, the 9/11 case is bogged down in a range of issues (see subsequent posts) that challenge the rule of law to its very core. How to reconcile the defendants’ status as both alleged terrorist war criminals and torture victims? Does US ‘reinterpretation’ of war crimes definitions square with the law of war? Can an appropriate balance between the alleged crimes and victimhood be achieved? Will the victims of 9/11 ever get the justice they deserve and, if so, at what cost? Seventeen years after the horrendous acts that markedly shifted western governments into a new era of aggressive national security pursuits, it seems that only time will tell. At the conclusion of the 35th round of hearings, we are left only with questions.